We’ve been working on branding initiates for various departments at UCLA for almost 10 years.

Beginning with the Campaign of Champions campaign for the UCLA Athletic Department and recently working on several initiative for the Anderson School of Business.  For the Sports Game Day Event sponsored by MEMES, the sports, media and entertainment department at Anderson and Villanova University’s School of Law, we created several branding films and had the pleasure of interviewing, Peter Guber.

Mr. Guber is chief executive officer of Mandalay Entertainment Group and co-owner of the NBA’s Golden State Warriors and Los Angeles Dodgers.  He also once ran Sony Studios, a record label (gave the world Kiss ) and films have earned over $3 billion worldwide and 50 Academy Award nominations. Recently, he produced The Kids Are All Right, which received four Academy Award nominations.

He has also been teaching for four decades at UCLA, in the graduate school for theater, film, and television–and more recently in the MBA program. Needless to say, Peter is an icon in the sports, media and entertainment world – and a professional storyteller.  He is the author of an awesome book on the importance of story-telling.  Tell to Win: Connect, Persuade, and Triumph with the Hidden Power of Story, a #1 New York Times bestseller.

His reason for writing the book came from his students, “After listening to the business students, there was a feeling that being able to craft your story into an emotional narrative was the “soft stuff” that didn’t count for very much and didn’t need to be coached.  As I thought about the successes and failures in my life, I realized that the secret sauce to success is the ability to take facts, bullet points, and data and orchestrate them into an emotional offering so that your audience metabolizes them and then the information becomes resonant, memorable, and actionable.

Peter Guber asserts “Telling stories is not just the oldest form of entertainment, it’s the highest form of consciousness. The need for narrative is embedded deep in our brains.  Increasingly, success in the information age demands that we harness the hidden power of stories.” [“The Inside Story,” Psychology Today, 23 January 2012]

Throughout the book, he uses the power of his own story as well as those of his astonishing roster of friends and colleagues (President Bill Clinton, Arianna Huffington, Muhammad Yunus, and reality-TV producer Mark Burnett) to identify and bring to life a set of ideas that he says can improve anyone’s storytelling abilities and help them get what they want out of life.

Bottom line he says, “Simply put, if you can’t tell it, you can’t sell it.”

The first chapter is entitled “It’s about the story, stupid.” You can read it by downloading it here. 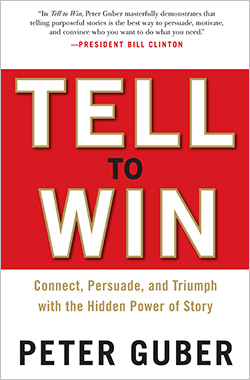