WHAT DOES A SPY MOVIE HAVE TO DO WITH APIs?

The digital revolution is a time of promise and peril.
A time of opportunity and disruption.
A time to Adapt or Die.
Those adapting will win. Those that don’t will go bye-bye.

Google’s API division is at the forefront of this digital revolution and so
they asked us to take the “Adapt or Die” concept mainstream. To achieve this goal, we created a ten-minute action spy thriller about a woman whose entire life is transformed by APIs.

It’s a movie without techy, geeky jargon.
A story that never mentions the brand.

ADAPT OR DIE: SYNOPSIS. DON’T GIVE AWAY THE ENDING.

Emily Morrison is a tech analyst on vacation in exotic Tulum, Quintana Roo when a mysterious Mayan treasure, an international cyber operative, and a rugged hero conspire to take her on a fast-paced adventure rife with risk and mystery.

Is Emily a spy? What is the golden frog? And what does technology have to do with all this?

In the end, we discover Emily’s on a mission to prevent a global corporate disaster and to deliver the message that if you want to survive in today’s competitive digital world you better Adapt or Die.

MAKING OF ADAPT OR DIE: Part One – CONCEPT

WHY WE MADE A MOVIE: CHET KAPOOR, CEP APIGEE

WHY WE MADE A MOVIE: ANURAGCMO

WE PREMIERED AND LAUNCHED “ADAPT OR DIE” WITH A MIX OF MEDIA.

The Adapt Or Die films were supported by an overall content marketing strategy that featured a world tour event in San Francisco, London, Sydney, Bangalore, New York, and Chicago. Including an online campaign and editorial partnership with Business Insider, Wall Street Journal, CTO, NASDAQ and other business publishers.

The campaign exceeded all performance benchmarks by a healthy margin. It was such a success that THE CHAOS PROTOCOL. FROM THE ADAPT OR DIE FILES was green-lit a month after the world premier. 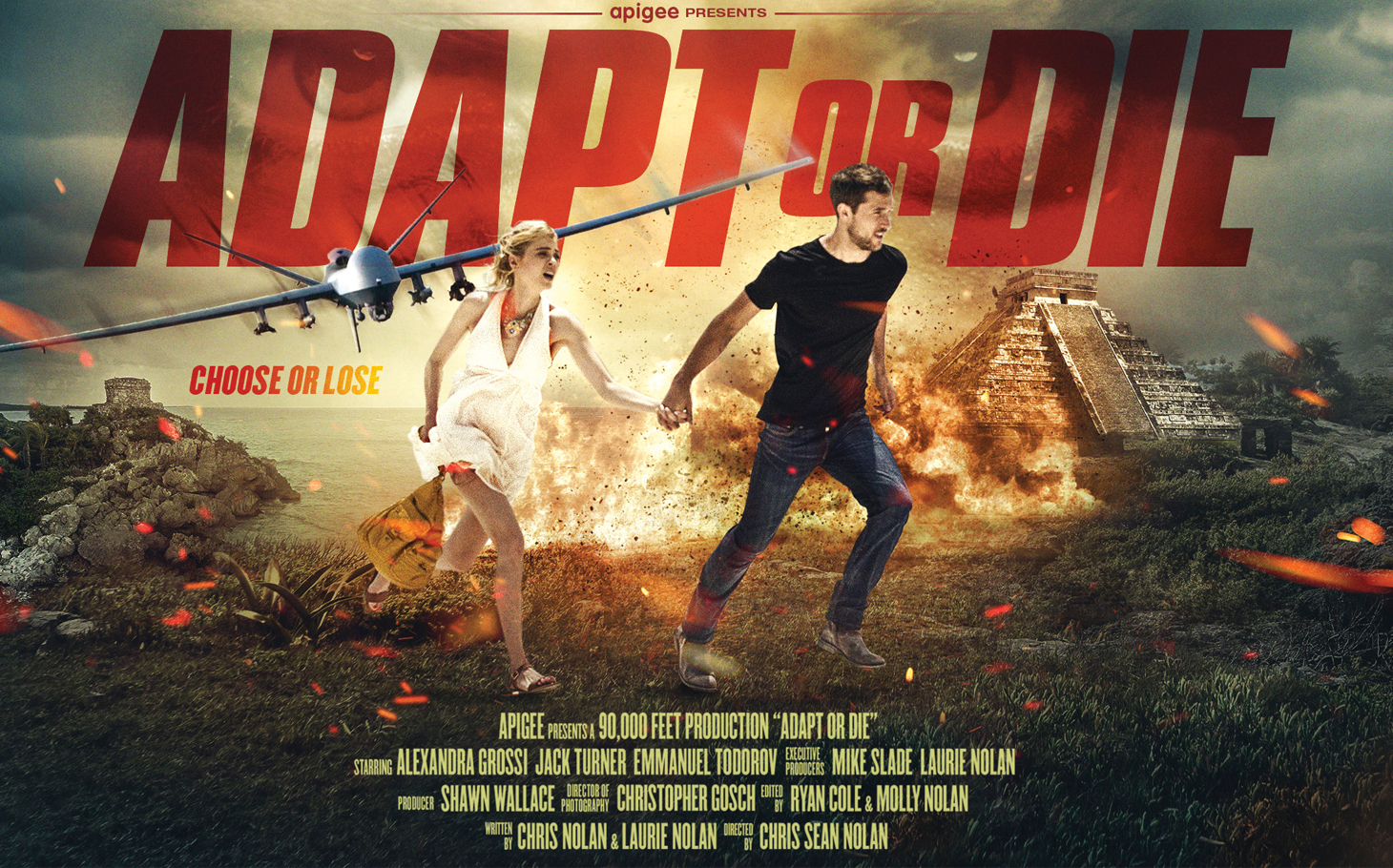 THE MOVIE IS JUST THE TIP OF THE STORY.

HOW DID THEY DO IT: EXPLAINED.

“We also built a, ADAPT OR DIE MOVIE HUB that allowed the viewer to delve deeper into the film and the world of API technology. The audience discovered that beyond just a travel adventure, the characters in the movie were actually navigating through a REAL-VIRTUAL REALITY travel experience created by a fictitious company, DREAMTIMZ TRAVEL. The magical realism was all developed by API’s. We produced other engaging contend, such as an ANNOTATED MOVIE VIDEO, that explained ”HOW THEY DID IT”.

90,000 FEET PROCESS:
NO STORY IS AN ISLAND UNTO ITSELF

In this content cluttered, easily distracted, continuously disruptive world, even the most amazing stories have to be cared for and fed to succeed.  Cared for by meticulously Storyspotting™ awesome content, then executing the story with high production values, and finally nurturing it with a smart media game plan that gets noticed.

UX/BRANDING /STORYSPOTTING™
90,000 Feet is a strategic, creative company that creates an emotional connection in everything we do.

IN HOUSE PRODUCTION AND POST
90,000 Feet brand storytelling is the most cost effective way to change minds and
hearts by providing Hollywood quality production services from concept to completion.

DISTRIBUTION PLAN
At 90,000 FEET, your story always has an end game to win the battle for attention.